Welcome to friend and fellow author, Marcia King-Gamble. Marcia's here today to answer some questions and share an excerpt from her book, This Way Home.

Definitely not life experience. I’d be petrified to live in one of those houses. The story is loosely based on the old Marla Hansen story; the model who was mugged in Central Park and her face slashed.

If you could trade places with one of the characters from your book, who would it be and why?

Erik , my hero I just love. He’s an artist. I tend to go for anyone with a creative bent. I love the way the mind works. Plus he was a man’s man and very insightful.

If you listen to music while you write, what are the top three songs on your playlist?

I rarely listen to music while writing, and although I am not much of a TV watcher, lately it seems to drone on in the background, More often than not there’s a dog in my lap partially asleep on the keyboard.  I can write with any distraction. I can write and hold a conversation. 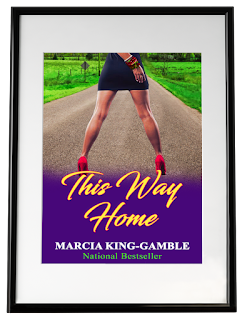 Liza Hamilton left her upstate New York hometown to chase her dreams in New York City. But her success as a supermodel was short-lived when she was mugged in Central Park and her face slashed. The once-perfect face that made her a fortune now does not exist.

Determined to put this traumatic event behind her, Liza returns to her hometown and opens a vintage shop. Peace and quiet evade her when her long lost stepbrother also puts down roots there. Complicating things is an irresistible attraction between them, and a home Erik inherited that Liza thinks should be her mother's.

Strange things happen in their respective homes that turn out to be stops used by escaping slaves on the Underground Railroad. Although Liza does not trust Erik, the couple join together to find out what is happening to them.

Believing that Erik stole the home that rightfully belonged to her sister and mother, she continues to keep him at arms length. But a shared past, and homes with a history continue to throw them together. Can they trust each other? Will love prevail? Will their ghostly ancestors intervene?

Liza wanted to hate Erik, but instead she found herself liking him more and more. She sat next to him in the pickup truck fully aware of his masculinity. His shoulders touched hers and the heat coming from his skin seared her. She had to keep reminding herself that he’d stolen her mother and Sara’s inheritance and that he was her stepbrother. 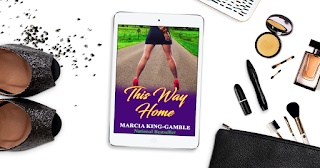 Running into Cassie and Kalib had been a big surprise. They seemed to be getting along well and Liza was happy for Cassie. God knew her life hadn’t been easy. She’d been crazy about her husband and devoted to those girls. But Cassie had always been insecure, and that illness of hers had taken over, ruining everything. Liza wondered if Cassie was still seeing her therapist  and trying to get a handle around her bulimia, or if she had simply given up and allowed it to control her life.

“What’s got you looking so down?” Erik asked breaking into her musings.

Liza smiled at him. He was so in tune and so insightful. No man with the remnants of morning shadow should look that good.

“I was just thinking what a coincidence it was to run into Cassie and Kalib.”

Liza focused on his hands, long fingers loosely holding the steering wheel. Hands that she bet would feel right at home on her body.

“That was quite a story the old man had to tell,” Erik said abruptly, with skepticism in his voice.

She felt the need to defend Sam. “He would have no reason to lie.”

“It’s strange that you and I would choose places to live that were depots on the Underground Railroad. Maybe he made it up.”

Had they chosen those homes or had the homes chosen them? She didn’t want to go there. She already felt guilty that her motivation for going out with Erik wasn’t entirely pure.

Romance writer, Marcia King-Gamble originally hails from a sunny Caribbean island where the sky and ocean are the same mesmerizing shade of blue. This former travel industry executive has spent most of life in the United States. A National Bestselling author, Marcia has penned over 34 books and 8 novellas.

She has contributed to Michael Fiore’s DigitalRomanceInc and served as a moderator on the now defunct eHarmony advice boards.  Having witnessed the bad, the ugly, and the not so good in relationships, she still prefers to write about happily ever after. Caring for her animal family keeps her grounded and sane.

A big 'thank you' to Marcia for visiting today. Come back again soon for more authors, books, and tours.