Today, I’m pleased to welcome friend and author, Kari Lemor, to Notes From a Romantic’s Heart. She’s here to tell us all about her new book, Hidden Betrayal, and to answer a few of our nosy questions! You know how much we love great answers!

The plot of Hidden Betrayal is not based on any real-life event, however Charlotte’s condition is. She has Aortic Stenosis. It is a heart condition where the heart valve is too narrow. There’s only a pin-size hole for the blood to go through. My brother has this condition and my stepmom also had another child with this who died within a few days of birth. His name was Timothy. In the book, Charlotte’s parents also had a son named Timothy who died of this and it is why Charlotte is so overprotected and pampered.

Is the setting for your book real? If so, have you been there? If it’s fictitious, is there somewhere real that you’ve used as a model?

Much of the book takes places in the mountains of Vermont. I don’t name a specific town or area of Vermont, but I have been to the state on many occasions and try to describe the location accurately. The chalet they stay at first is based on a chalet my family went to on a vacation many years ago when I was young. This one was on Lake Chocorua in the White Mountains of New Hampshire. The playground and pond Drew and Charlotte hike around and have fun in is based on where we stayed in New Hampshire.

My life isn’t typically wild and crazy, but I did have one event that I used in a book. I was playing with my then 3 year-old grandson and we were building a cushion fort. I placed an afghan over the top, then peeked through one of the loose holes to see him. He got scared and jumped up, bumping his head into my face. I went flying back, blood gushing from my nose. (yes it was broken) Luckily my husband was in the next room and got the boy calmed down while Mimi mopped up the blood. I used this in my book, Broken Dreams, with Darcy and the boy she nannies for, Tanner. 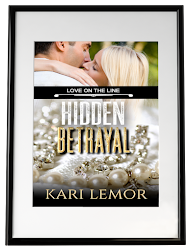 Trust is more precious than jewels…

Getting caught in the middle of a jewelry heist was not on Charlotte Silva’s plans for the day. Nor was being taken hostage with sexy lawyer, Andrew Thayer. Lucky for Charlotte, the ex-soldier helps her escape but not without consequences.

Drew Thayer has one job to do. Hide out in a remote Vermont cabin protecting the pampered heiress from killer jewel thieves hot on their trail. But Charlotte isn’t the spoiled princess she projects, and the desire she inspires shocks him.

Drew’s boss, the State Attorney, has suspicions around Charlotte’s involvement in the heist. If she finds out Drew’s hidden agenda, their tentative truce and growing feelings could all be shot to hell. Unless the jewel thieves get to them first…

They stayed holding hands as they walked through the woods. She took him down the path that led to the lake, and they paused to admire the sparkling water.

“If you’re not an overprotected invalid, sure. Otherwise, according to my parents, it’s a cesspool of infectious microorganisms that could kill you. See? There’s a beach over there. It’s probably too cold to go in now.” 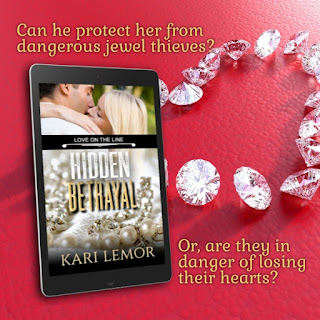 “A little cold water is going to stop you?” His eyes gleamed with mischief. “It’s seventy-five degrees outside. I thought you were an adventurous person.”

“Are you daring me? Because I’d have to dare you back.” With that, she walked to the edge of the water and kicked off her shoes, then threw her jacket on top of them. As she slid her hands under the waistband of her capris, his eyes widened, and his jaw slacked.

“You aren’t seriously going to peel off your clothes and jump in.”

She tugged the waistband down a few inches more, waiting for his reaction. He swallowed hard, his Adam’s apple bobbing up and down.

“Well, I didn’t bring anything to swim in, so looks like I’ll have to use my birthday suit.”

She wouldn’t do it. The last thing she wanted was Drew, or any man, seeing her ugly, scarred skin, but it was fun to tease him. His reaction made her chuckle.

“I wouldn’t want you to get sick and catch something while I’m responsible for you. Maybe the water is too cold.” He edged toward the lake and swished his hand through the crystal-clear liquid. “Yeah, not exactly bathwater.”

His words about being responsible for her should have made her see red, but since she was the one who’d pushed him, she let it slide. Strutting toward him, she splashed into the water and did her best not to shiver at the chill on her feet. Definitely too cold to swim today, but she could take it on her feet for a short while.

“Oh, I don’t know, it’s actually kind of refreshing,” she lied. “Maybe you should strip down and join me.”

As he caught on to her teasing, he grinned and shrugged the backpack to the ground, then tossed his hoodie on top of it. His hands reached for the hem of his T-shirt and pulled up. Lord Almighty, those were some fine abs. Then, he bent over laughing and lowered his shirt.

“Okay, so you got me. We don’t have time for swimming right now, anyway.”

Tugging her waistband back into place, she winked at him. “Too bad. It’s been a while since I’ve been skinny dipping with a handsome man.”

Kari Lemor has always been a voracious reader. One of those kids who had the book under the covers or under the desk at school. Even now she has been known to stay up until the wee hours finishing a good book. Romance has always been her favorite, stories of people fighting through conflict to reach their happily ever after.

Writing wasn't something she enjoyed when young and only in the last few years began putting the stories that ran rampant in her head, down on paper.

Now that her kids are all grown and have moved out, she uses her spare time to create character driven stories of love and hope.

She lives with her husband and they split their time between a small town in New England and beautiful St. Augustine. Being near the ocean is her dream location.