It’s Day 3 of my weekend sale. I’ll be sharing some great 99¢ sales on every genre/sub-genre of romance. So, sit back and browse.

Up for Sunday, Paranormal Romance and Ultra-Steamy Romances.

Noah Miller is shocked to learn that an unknown great uncle has named him heir to the family fortune, including the family residence known as Gable House. Built by Noah’s fifth-back grandfather, the house is ripe with family secrets and unusual occurrences.

Maggie Shepard has spent the past ten years researching the history of Willow-By-The-Sea, including that of her own ancestors. Considered an authority on New England history, she’s often sought out as a consultant. When Noah Miller asks for her help in acquainting him with both the house and his ancestors, she jumps at the chance to share her knowledge with the handsome architect.

Noah and Maggie have an immediate attraction to one another, made even more so by the time they spend together researching the Gable family history. The fact that each Gable male died an untimely and gruesome death, leads Noah and Maggie on a quest for the truth in hopes of setting a murderous spirit free.

Out to debunk the woman's claim of being able to guide seance participants into the future, both hers and Matt's skepticism is put to the test when they find themselves transported to 2065.

Certain the only one they can truly trust is each other, they form an alliance that quickly stirs more intimate and loving memories. Just as they are about to be shown the way home, a presidential assassination puts their lives, and their chances for a "happily ever after," in jeopardy.

A career soldier, Major Liam McGregor has been following strict military orders for over a decade. Considered one of the best by his superiors, it’s not surprising he’s the operative chosen for an assignment that, if successful, could save mankind.

Years earlier, chemical warfare left the women of earth sterile and the population is dwindling fast. The only hope for survival lies in the government scientists’ ability to successfully breed alien females with healthy human males. So far, their attempts have been mediocre at best.

Alora, second daughter of the House of Delawon, is their last hope. A government protectee since her family’s transport crash landed on earth years earlier, she is the last surviving fempod from Tethys, one of Saturn’s habitable moons.

Together Liam and Alora must travel from the government’s safe house in what used to be the state of Colorado to Traverse City, the new capitol of the United Republic. Their route takes through both safe and hostile territory.

What poses more of a threat? The lawless marauders who’ll stop at nothing to vanquish their prey? Or, the forbidden desires tempting the soldier and the alien princess?

The heat level on all of these is steamy-erotic. They include multiple fully realized lovescenes and language. Be warned. They are HAWT!

Beth Andrews has given up on ever finding a happily-ever-after. Still smarting from a bitter divorce, she’s decided the only thing she truly needs is sex.

Jonathan Tucker is perfectly satisfied with his bachelor lifestyle. He has a wonderful career, a kick-ass new condo, and any woman he wants. As often as he wants. At twenty-seven, he’s convinced he’s living life exactly as it should be.

Will the older, albeit sexy, ad executive and the handsome, talented artist both find there’s more to life than what they have now? Or, will they be satisfied with what the both claim to want—d*mn near perfect sex!

After a prolonged and messy divorce, 42 year old Cate Matthews uses her financial settlement to purchase a condo in a regentrified warehouse. The only problem with her new home is the plumbing. It doesn’t take her long to realize she needs an expert to fix the rusty pipes—both the building’s and her own.

When Mitch shows up in Cate’s lecture hall, she’s immediately impressed with his knowledge of U.S. history, a subject to which she’s devoted her academic career. However, as impressed as she is with his historical acumen, when he lands on her doorstep with an impressively large bag of tools in hand, history is the last thing on her mind.

Perhaps this much younger and infinitely sexy man is just what she needs to get her dormant sex life back on track. Given the huge difference in their ages, Cate assumes the relationship will fizzle out after a few—albeit perfect—trips around the bedroom.

Much to her surprise and delight, Mitch seems to be in it for the long haul. Their 15 year age difference is the least of her worries when she realizes how quickly she’s been seduced by the handyman.

High school teacher Maggie Lewis has decided to start looking for lust instead of love, and the right place for that is through Lusty Liaisons, a unique and exclusive dating service. Her friends are always bragging about their fantastic sex lives, and Maggie wants a man who will ignite the fire that burns deep inside her, a man who'll satisfy her every desire…without the hassle searching for him through the tedious dating process. She's hesitant but excited to give in to temptation and agrees to a one-night only liaison with a sexy suit, a virtual Greek God who immediately puts her at ease. Maggie only hopes he's half as good in bed as he looks.

Business mogul Evan Steele is a workaholic. His recent sexual conquests have left him wanting something more, something different. He longs for a lusty, no-holds barred night with a woman who still borders on inexperienced. The demure teacher might be exactly what he needs. But can he break through her shy shell to delight in the fire that simmers below the smooth surface?

Aaron Blake is a man with a secretive job, a past, and also in need of a short diversion. Will meeting up with a beautiful, but emotionally wary, woman fulfill a need he didn’t realize he had?

Tax consultant Katherine Weller isn't ready for a relationship after a divorce that left her empty. But when her best friend suggests she set up a sex-only date through Lusty Liaisons, a unique and exclusive dating service, she's uncertain but intrigued.

Maybe a hot romp with a sexy, younger man is exactly what she needs to take that confident first step into her new life as a single woman. 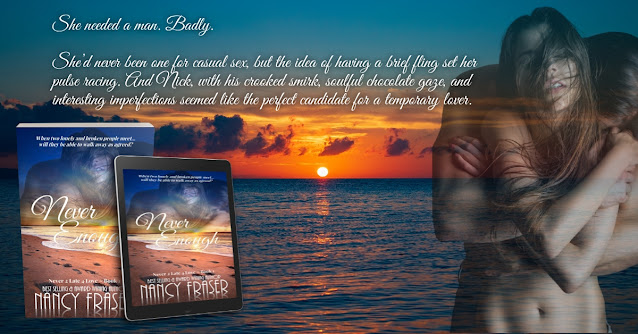 When Amanda Thorne arrives on San Bella Island, she’s tired and in bad need of a vacation. She’s just finished paying off her late husband’s many debts by selling their home and belongings. On her way to Dallas for a new job in a medical research lab, she’s taking one week to recoup before beginning her new life.


Nicholas Holloway is recovering from two years undercover for the U.S. Marshal Service. Ordered to take a vacation to clear his head, he ends up on San Bella at the same time.

Will these two battle-scared souls find peace in the other’s arms? And, will they be able to walk away at the end of their one-week fling?

A Bit About Me

Nancy has published over forty books in full-length, novella, and short format. When not writing (which is almost never), Nancy dotes on her five wonderful grandchildren and looks forward to traveling and reading when time permits. Nancy lives in Atlantic Canada where she enjoys the relaxed pace and colorful people.

Please scroll down and check out Days 1 & 2 of the sale.

I’ll be back all week with guest authors, books, and giveaways!