RUINATION OF A ROGUE by Author Clair Brett

Notes From a Romantic’s Heart is pleased to welcome Author Clair Brett to the blog today. Her new release, Ruination of a Rouge, Book 2 The English Rose Series is available in both eBook and Print. 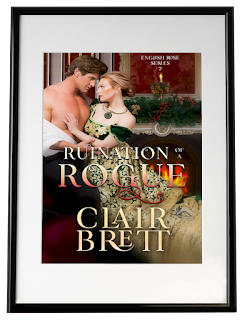 Her God mother’s annual Twelfth Night house party and ball is Miss Maria Lightowler’s best chance of finding a husband who will secure her future. If she can transform herself from wild country girl to elegant lady, perhaps she can pull it off. Not to mention a magic pendant professed to find your soulmate she may have a chance. With no dowry, the man she marries must have enough of a fortune, so Maria need not worried about those things she went without as a child. From the moment the guests begin to arrive, one unworthy man seems determined to stand in her way. What he obviously lacks in funds, he makes up for in charisma, but Maria repeatedly strikes him from her list.

Lord LaZander Rothchild, Viscount Milford is hiding. His hope is it will only be until the potential scandal in London dies down. Since his father went ill, Zander has been the victim of too many marriage traps to count. Now at his aunt’s annual match making extravaganza, he hopes to avoid most of the guests until he can sneak back into the city. His aunt, unfortunately, has other ideas. Luckily, because of his propensity to be embroiled in so many mishaps, the marriage-minded mamas at the house party have blacklisted him concerning their daughters. However, one beautiful and tempting young woman, unaware of him on any level, seems determined to cast him aside as well. While she treats him not as the heir to a Marquess or a man of any real consequence Zander grows determined to prove he is a worthy option and may just set and get trapped in his own marriage scheme. 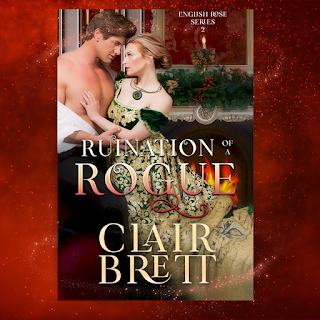 "Oh hell." Zander heard the expletive the same time light streamed in from the hallway. He got his candle out before the door closed. He sat frozen. Because the coats hung on hooks blocking his view, breathing was his only indication someone had entered. Careful not to make a noise, he leaned forward around the coats and there at eye level was a heart shaped, plump bottom. Miss Lightowler. That he could recognize the girl from that body part explained all he needed as to what his preoccupation was becoming. It didn't help that she smelled of roses and something spicy. He went hard and sent a swear into the confined space without voice.

She was bent forward, no doubt peering out of the keyhole. He didn't want to startle her, but how did one do that? The point of hiding in a closet was that no one would assume a grown man would hide in a closet. Zander took the chance that like everything else Maria would not react as the typical deb.

She jumped and almost hit her head on the shelf that sat above the hooks, but with no other sign of fear turned, yanked several coats off their hooks to see her adversary. "Oh, Lord Milford, you scared me," she hissed.

"At your service." He made a mock bow still seated in his chair. "Again, are you hiding from someone?"

"Are you?" she countered.

"Why else would I be in a closet?"

Author of 7 Historical romances, including the Improper Wives for Proper Lords series, Clair Brett lives in NH with her ever-emptying nest which includes her children when they visit, two cats, one willful boxer/beagle, a mean Pitbull mix, that will lick you to death and run into her kennel when you speak loudly, and one grand dog who one day just moved in. And an ever-harassed husband who takes it all in stride. A lover of all things Regency, Clair, was hooked when she first read Jane Austen. She is a firm believer that a reader finds a piece of who they are or learns something about the world with every book they read. She wants her readers to be empowered and to have a refreshed belief in the goodness of people and the power of love after reading her work.

It's been my pleasure hosting Clair today on the blog. I'll be taking a short break for the rest of the week but will be back next week with more authors, books, and giveaways!
Nancy
at July 06, 2021