IN DAYLIGHT AND DARKNESS by Author Dana Ardis **REVIEW** **GIVEAWAY**

Notes From a Romantic’s Heart is pleased to welcome author Dana Ardis to the blog. We’re featuring her new release, In Daylight and Darkness. Book 1 in the new Worldwalkers series. You can find all the stops on Dana’s tour at Goddess Fish Promotions. Remember to enter the Rafflecopter giveaway for your chance to win a gift card. The entry form is at the bottom of this post.

GENRE: Romantic Fantasy
About the Book 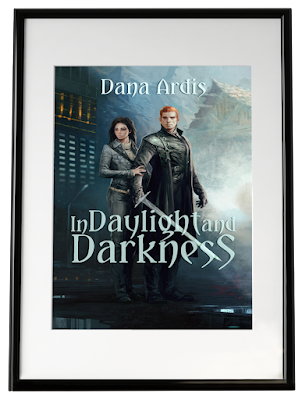 Lots of kids have imaginary friends, but Kate had an entire imaginary world to visit when she was a girl. When she keeps insisting that her friends are real, she ends up in an institution, where she is forced to put that part of her life behind her. Shortly after Kate turns eighteen and leaves Bayshore Psychiatric to start a normal life, her old friend Cor returns, transformed from the boy she loved into a handsome but guarded stranger. His world is darker than the fun and games she remembers from childhood and he warns her that the monsters there can hunt her now that she lives on her own. If she’ll come back to his world long enough to learn the magic she needs to defend herself, he’ll agree to stay out of her life. He’s only imaginary, but it gets harder and harder for Kate to think of saying goodbye.

Get your copy of In Daylight and Darkness on Kindle Unlimited.

Enjoy an Excerpt
The sun set without any trouble. For the second night in a row, I didn’t see anything I wasn’t supposed to. I pushed the cold cup of coffee away, relieved.

Then Cor walked through the door of the diner. 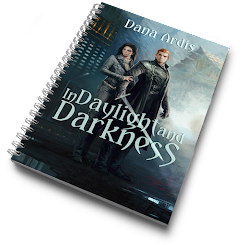 After everything I’d gone through, part of me still wanted to rationalize why no one stared as he walked to my table despite his tangerine hair and his long, black coat. Maybe he stood out less in my sketchy neighborhood. Maybe people assumed his impossibly bright hair came out of a bottle.

No. No one else could see Cor because he didn’t exist. I couldn’t make excuses for him anymore. By now, I knew better than to think imaginary friends were harmless.

I didn’t want to see him, but I couldn’t quite ignore him, either. He stopped just outside the range of comfortable conversation, his golden eyes not quite meeting mine.

If I’d meant to ignore him, I should have stayed in my apartment, taken my sleeping pill like usual, and been out like a light before the sun had slipped beneath the horizon.

“Cor,” I said, his name familiar on my tongue, though I’d sworn I’d never say it again. His narrow shoulders relaxed just a bit at the fact I didn’t say his full name, as a stranger might have.

“Kate.” He spoke so softly, the name almost sank beneath the level of diner chatter. Or the sound of the blood pounding in my ears. He slid in to the opposite side of the booth.

He’d never been shy like this as a child.

The last time I’d seen him, five years ago, he’d been hardly more than a kid, spindly with sudden growth, stricken by my disbelief. It unsettled me to see him recast as this nervous stranger. His face was long and lean, his features angular and stark, handsome but subtly inhuman. His alien eyes, yellow-hazel with a vertical pupil like a cat’s, had changed the most. I didn’t recognize the hardness in them at all.

I was not prepared to have him sitting here, real as real, toying with the salt shaker.

My Review
4.5-Stars
Imagine growing up in an environment where everyone who matters to you thinks you’re mentally ill, even when you’re not. After enough time, you begin to question your own reality. Kate, the heroine in In Daylight and Darkness, is finally easing her way back to a life with some semblance of order.

Unfortunately, that order is interrupted by the very person/situation that cost her nearly everything in the first place. Cor is there to protect her. Or, more precisely, to teach her to protect herself from the dangers of his world.

The author did a wonderful job of dealing with the delicate issue of mental illness. As well, Cor’s world was beautifully written to the point that I had no trouble visualizing it.

My only drawback with the ‘strings’ at the end. While I appreciated the happy-for-now ending, I felt there were some issues unresolved. However, with any luck, we’ll get a Book 2 featuring some of the interesting characters from this story, which will tie everything up in nice neat bow.

Dana Ardis grew up surrounded by books and decided she likes it that way, pursuing a career in public libraries. Now she writes her own books, creating the rich worlds and vibrant characters that tugged at her imagination as a child.

In addition to writing, she loves art, board games, travel, and anything to do with dogs.

Enter the Giveaway
Dana Ardis will be awarding a $15 Amazon or Barnes and Noble GC to a randomly drawn winner via Rafflecopter during the tour.
a Rafflecopter giveaway
~ ~ ~
Thank you so much for joining me today. Please come all week for more authors, books, and giveaways.
Nancy
at September 20, 2021

Email ThisBlogThis!Share to TwitterShare to FacebookShare to Pinterest
Labels: #YA; #Fantasy, Dana Ardis