Notes From a Romantic’s Heart is pleased to welcome author Daria White to the blog today to talk about her new cozy mystery, Photo Bombed. You can find all the stops on Daria’s tour at Goddess Fish Promotions. Don’t forget to enter the Giveaway for a $15 gift card. The entry form as at the bottom of this post.

GENRE: Cozy Mystery
About the Book 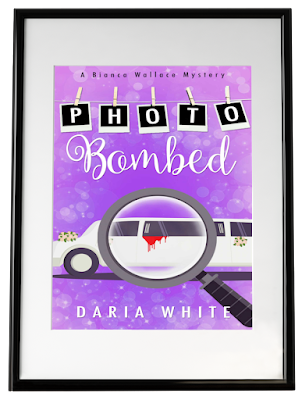 When a corpse crashes the party, Bianca is on the case.Bianca Wallace is a work from home mom raising her teenage daughter as a single parent. She’s determined to stand on her own two feet in Edenville, Texas after her bitter divorce. When the town’s wedding of the year stars her friend as the bride, Bianca can’t wait to celebrate the nuptials. Neither she nor the guests expect a corpse! When the police suspect the bride, Bianca's determined to prove her friend’s innocence.Lamar Sims, the new police detective in Edenville, is investigating the murder case. Bianca’s “interference” is not helping, but she won't stop when her friend's freedom is on the line. He makes it clear he wants her to let the police do their job, so she has to find ways around him.No one in Edenville is safe until the killer is behind bars. Bianca won’t let Detective Sims dismiss her hunches. They may have to work together before another dead body shows up.

Photo Bombed will be on sale for 99Ȼ during the tour.
Enjoy an Excerpt

Bianca raised her head and acknowledged the man taking a seat across from her. “Good evening.” She folded her fingers on the clothed table. 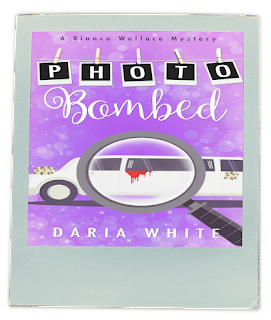 The man extended his tanned hand. His bright smile made him charming. “I’m Simon.”

“Bianca.” She shook his hand, ignoring his sweaty palm.

His face softened as his tone contained wonder. “Tell me something you love about yourself.”

His question surprised her. “Well… I think I love my creativity. I’m a graphic designer.”

His smile grew bigger. “How long have you been doing that?”

“I’ve been drawing since I was a kid, but I opened my business a few years back.”

“Same here.” Simon ran his fingers through his short, brown hair. He grabbed at the small bowl of nuts on her table, popping a few in his mouth without even taking his baby blue eyes off of her. “I got into photography in high school, but now I travel for the magazine I work for.”

Bianca didn’t mind this conversation so far. “That’s amazing. I know for me, graphic design wasn’t my first choice. I thought about the law, but when I had my daughter…” Her eyes bulged as Simon’s mouth fell open. “Are you all right?”

His spoke as if in disbelief. “You have a child?”

“So you’re…?” He blinked rapidly as if trying to process what she was saying.

“Divorced. Almost three years now.” She tilted her head to the side, trying to read his expression. “Are you alright?”

He ran a hand down the back of his head. “Yes, I just wasn’t planning on dating a woman with children. I never wanted kids of my own.”

Bianca froze momentarily. Not everyone wanted children. She could understand that, but this was the first time she’d heard it out loud and to her face. It never crossed her mind until now that if she got into another relationship, would the man accept her daughter? If he didn’t, it was his loss. Her daughter came in the package deal.

“Thank you for sharing,” she said.

He gave a faint smile and stood to his feet. “I hope you find what you’re looking for.” He extended her hand. “Have a good evening.”

She returned the gesture. “You too.” Bianca returned to her chair as he walked away. She hadn’t expected that. As she adjusted in her cushioned seat, another man approached her table. Chin high and shoulders back. Bianca didn’t know whether to describe him as confident or cocky based off the smolder he gave her. With an earring in one ear and a gold chain hanging around his neck, he took the seat across from her. 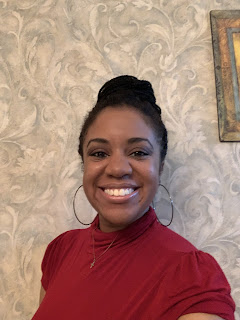 Daria started writing as a teenager. Since she loves romance novels, she figured why not write them too? She also writes Christian fiction along with cozy mysteries! Daria graduated with a degree in healthcare management, so writing was not in the cards for her. It’s rare that you won’t catch her reading. Aside from that, she loves Turner Classic Movies, painting, Pilates, the piano, and chocolate.

Daria White will be awarding a $15 Amazon or B/N GC to a randomly drawn winner via Rafflecopter during the tour.
a Rafflecopter giveaway
~ ~ ~
It's been my pleasure hosting Daria today. Please come back again all next week for more authors, books, and giveaway. And, while you're here, be sure to scroll through my previous post for active givaways.
Nancy
at September 10, 2021