Today we welcome one of my favorite authors, Eileen Dreyer, to Notes From a Romantic’s Heart. We’re featuring her book, Daughter of Lore, Book 1 of the Daughters of Myth series. You can find all the stops on Eileen’s tour at Goddess Fish Promotions. Also, don’t forget to enter the giveaway. The entry form is at the end of this post. 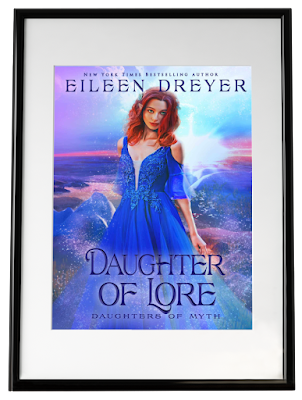 Zeke Kendall doesn’t believe in fairies. He’s a scientist; an anthropologist who has spent the last ten years digging in the harsh deserts of the American Southwest. But things look a lot different in the soft green shadows of Ireland. There it is easier to believe that magic exists, especially when Zeke tumbles off a fairy mound and ends up in the arms of the beautiful Nuala, who seems to know everything about him. When she tells him she is a fairy, he actually wants to believe it, even as he knows better.

Nuala is daughter of Mab, Queen of Fairies. She has grown up in the twilightland of the fae, fiercely loyal and loving to her people. But she has also been in love with Zeke Kendall ever since she first saw him in her scrying water as a child. To now have him so close is both joy and torture.

For she is the heir to the great crown of the Tuatha de Danann fairy clan. She has no place in Zeke’s world. And he, a man drawn in the sharp edges of his deserts, has no place in hers. Even as passion rises and the love she’d only dreamed of blossoms into reality, Nuala knows that a future for them is impossible. And yet, she can’t find a way to send him back to his own world.

Note: This title was previously published as Dark Seduction
Available on Amazon

It was an impulse he couldn’t seem to control. It wasn’t a mountain. Not a bell tower from whose ramparts entire vistas could be viewed. Hell, it wasn’t even a good steep climb. It was just a big pile of loose rocks allegedly collected by the fairies. Even so, Zeke seemed to be suddenly afflicted by the age-old impulse to be King of the Hill. He wanted to stand on top. 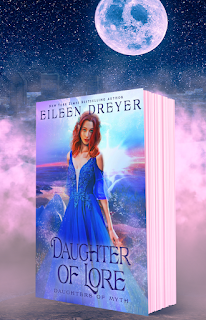 There was mist against his face. Salt in the air that crept in from the ocean. Zeke climbed carefully, knowing that although the whole structure was solid, each rock was loose and an invitation to fall butt-first back to the ground.

He was holding his breath. How odd. It was as if, even with the sounds and smells and tastes around him, the world was holding absolutely still. Had stopped spinning on its daily axis just to watch Zeke Kendall climb a fairy hill.

He reached the top just after the sun set. The western sky was a gaudy red that faded to the purple of fuchsia closer to the sea.

Suddenly he caught sight of her. A flash of color, a waterfall of laughter, a scent of cloves and gorse. Not even thinking where he was, only that he had to catch her this time, Zeke spun on his heel. He saw her skip into the deep shadow. He yelled out to her.

He thought she called back. “No!” was what he thought he heard. But that couldn’t be right. So he called to her again.

He didn’t realize that from below him, his cries sounded like those of a man falling. His attention caught by a flash of peacock green in the shadows, Zeke lost his balance and went off the side of the cairn headfirst. He bounced forty feet straight down.

For a moment there was the startled cry of disturbed birds, the crash and rumble of a body falling. The sudden, stricken silence that inevitably followed.

But Zeke didn’t know. He didn’t know, because he was looking up into the most beautiful green eyes he’d ever seen.

He couldn’t take his gaze away from those grass-sweet eyes. “Don’t I know you?”

“You must get up, Zeke,” she said, leaning over him, her eyes anxious and her hands silken-soft as she patted at his cheek. “You have to get away before the queen sees you. It’s your only chance.”

“The queen?” he asked, smiling. Not feeling anything at all but the brush of her satiny fingers against his face.

She reached under his shoulders, trying to push him up. “The queen of fairies.”

Odd, how she shifted, her colors darkening, her eyes growing almost wild. “No!” she begged, pushing him, harrying him. “You don’t know what you ask. She’ll destroy you.”

But Zeke couldn’t move. “I’d rather sleep, I think. And oh, I should probably tell you...” Already his eyes were closing against the gentle pressure of those wonderful fingers. “I don’t believe in fairies.”

Her voice was so soft it was like a thought in his head. A thought so suddenly dark, he shivered, even lying in her silken arms. “It doesn’t matter,” came her voice, sounding suddenly sad. “They believe in you.”

New York Times bestselling author and RWA Hall of Fame member Eileen Dreyer and her evil twin Kathleen Korbel have published over forty novels and novellas, and ten short stories in genres ranging from medical suspense to paranormal to romance. She is thrilled to have joined Oliver Heber Books to continue her Drake’s Rakes series about Regency aristocrats who are willing to sacrifice everything to keep their country safe, of which Ill Met by Moonlight is a near relative.

A former trauma nurse, Eileen lives in St. Louis with her husband, children and large and noisy Irish family, of which she is the reluctant matriarch. A seasoned conference speaker, Dreyer travels to research, and uses research as an excuse to travel. Oh, who's she kidding? She doesn't need an excuse. She has the Irish wanderlust and satisfies it as often as she can to the point that she has sung traditional Irish music on four continents. She also had the incredible chance to research Drake’s Rakes by attending the 200th anniversary of not only the Battle of Waterloo, but the Duchess of Richmond ball (in period attire). She has animals, but refuses to subject them to the limelight.

Eileen Dreyer will be awarding a $20 Amazon/BN gift card to a randomly drawn winner via Rafflecopter during the tour.

a Rafflecopter giveaway
~ ~ ~
Thank you so much for stopping by. Please come back again soon.
Nancy
at April 26, 2022