Notes From a Romantic’s Heart welcomes Author Anya Summers. Today we’re featuring her new book Midnight Masquerade. And don’t forget to enter the Rafflecopter giveaway below for your chance to win a $25 gift card! 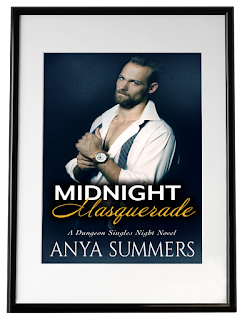 Sophia is in trouble. Again.

Maybe it’s the masks. Maybe she needs to feel something other than regret. Whatever the reason, she is either daring… or foolish… when she trades places with another submissive, and ends up spending the night in her mysterious boss’s bed.

He doesn’t recognize her, but now she’s had him, she knows one taste of his dark love will never be enough.

Gabriel Ryan has one firm rule: don’t sleep with employees.

Even though he’s infuriated beyond measure to discover Sophia in his bed after a night of mind-blowing pleasure, she is now in his blood. He craves her. Needs her. Yearns for her surrender.

But she is forbidden. He will break her with his dark desires.

When Sophia’s dangerous past waltzes into his club, Gabriel must protect her. He must claim her. And break every single one of his rules to keep her safe.

Available on Your Favorite Platform

But tonight, he would participate in the event, under threats and orders by Sophia. He sighed over the fact that he could deny the woman little. And she had badgered him from the start about joining in the events each month, until he finally yielded.

Granted, that might have had something to do with the way she had stood in his office earlier today, her hands on her lush hips, a fierce scowl on her face and a glimmer in her eyes that told him that she would forcibly escort him if needed.

He’d folded like a house of cards while ignoring what the sight of her in his office did to him and his libido. Gabe refused to let his dick do his thinking for him, no matter how much Sophia stirred him. 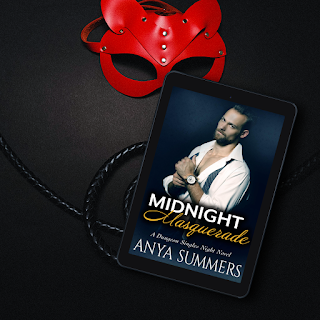 In the elevator, he adjusted the black mask covering his face. He’d not changed into a costume, as much as his event coordinator had pestered him to wear one. The woman had gone so far as to have a costume made for him. But he couldn’t see himself prancing around in the dandy seventeenth century garb, not even to make her happy. Instead, he had stuck with his black suit and navy-blue tie. His one concession, besides his willingness to participate tonight, was the mask covering the top half of his face.

And the mask was all Sophia would get out of him.

The mood in the Eros Pit most nights tended to be more subdued—with the extra added elements of scenes in progress and muted music—than the club upstairs. That was by design on his part. At least, it usually was more laid back, with scenes at various stations and the occasional high-pitched moans from submissives. But tonight, with the masquerade event, the air in the Eros Pit held a thrill of excitement. Submissives in their exotic costumes were grouped together, talking excitedly, wondering who they would end up with for the night.

It was a rather brilliant strategy and way of introducing unattached Doms and submissives to one another. In participating, they were agreeing to scene with another for the night—and possibly more, depending on the connection.

And the place was packed to the gills tonight.

Scanning the crowd, Gabe discovered that even his rapscallion brothers were in attendance—and had gotten into the spirit of the event, given their costumes, or most of them had, anyhow. Dean was a no show, but that had been the norm the last few months.

The submissive selection process was already in progress, with peals of laughter and squeals of delight from the women. It was arranged so that by midnight, all the submissives would be at their stations. With time to kill before he went to his private room, Gabe made his way through the throng to his private section of the club. Most nights there were available subs standing near the black velvet rope separating his section of the club, or sitting at one of the booths or tables nearby with the hope that either he or one of his brothers would give them a nod and join them. Yet, this evening, all those subs were dressed in costume and waiting in line to select their Dom.

Anya is a bestselling and award-winning author published in multiple fiction genres. She also writes urban fantasy, paranormal romance, and contemporary romance under the name Maggie Mae Gallagher. A total geek at her core, when she is not writing, she adores attending the latest comic con or spending time with her family. She currently lives in the Midwest with her two furry felines.

Anya Summers will be awarding a $25 Amazon or B/N GC to a randomly drawn winner via Rafflecopter during the tour.

Thank you so much for joining us today. There are more tours coming up soon, as well as new, non-tour posts by some of my friends and fellow authors. Feel free to stop by any day. Until next time, stay happy, stay healthy, stay well read!