Happy Thursday everyone! Today it is my privilege to welcome good friend and author, Caroline Clemmons, to Notes From a Romantic’s Heart. Caroline is visiting with her new book, Mail Order Blaze, Book 10 of the Secret Baby Dilemma series. 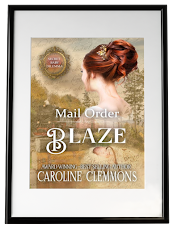 A woman determined to save a child…

A man creating his dynasty…

An escaped murderer determined to get revenge.

After her sister dies at the hands of her brother-in-law, Bernadette “Blaze” Cook is determined to save her twenty-two-month-old nephew from his brutal father. Where better than several states away on a Texas ranch?

Andrew “Drew” Wagner has been looking forward to the arrival of his mail-order bride to start his family and be his docile companion, housekeeper, and cook. When she shows up toting a toddler, he is shocked but willing to accept the child. But he learns his wife earned the nickname Blaze not just because her hair is fiery auburn—she has a temper and the will to protect those she loves.

Blaze and Drew must overcome their differences to battle the evil man determined to destroy them. Will the couple conquer the monster pursuing Blaze and her nephew?

Bernadette Cook, called Blaze by her family, tiptoed into her sister’s hospital room and whispered, “Anna? Anna, are you awake?”

A slight beckoning movement of her sister’s hand let her know Anna had heard. “Blaze, come in and help me sit up.” 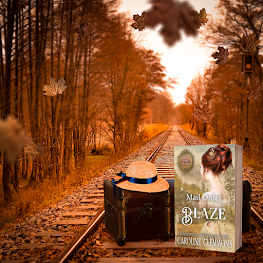 She hurried to the bed. “No, don’t stir yet. You need a lot of rest. Kenny is with the preacher’s wife until I return for him. I’ll make sure he’s well-cared for until you’re well and can take charge. Relax and concentrate on recovering.”

Against the white sheets, her poor sister’s bruises shone dark purple and angry red. The sight forced Blaze to choke back tears for Anna’s pain. Older by four years, Anna had been a good example when they were growing up. Now Blaze was the one who needed to care for her big sister.

Struggling, Anna rose to her elbow and pulled papers from under her pillow. “I’ve written this out for the judge. You’ll need them if Lester succeeds in killing me next time. I sure don’t Kenny living with Lester.”

Never would Blaze let that happen. “Don’t even think about him doing this again, much less killing you.” Blaze knew another beating like this one would surely end her sister’s life.

“He would have this time if you hadn’t arrived. Once you’re a mail order bride, there’s no hope for me unless I can get to where you are. Oh, but Kenny is the one who matters. Promise me you’ll take him when I’m gone.”

Blaze fought for composure, hoping to reassure her sister. “I’ve promised, haven’t I? Please don’t talk like that. I plan for both of you to join me. All you have to do is get well enough to travel. The train goes all the way to the town nearest Mr. Wagner’s ranch.”

She lowered her voice again. “Remember not to let Lester know we’re going to Texas. Keep saying I’m going to Montana Territory so he can’t track you.”

Anna’s split lips curved slightly. “Blaze you’re a dreamer, but I’m grateful you’ve included me in your future. Sister, something is wrong and I... I don’t think this baby will be all right. I don’t think I will be, either.”

Blaze’s voice caught in her throat. “What did the doctor say? Has he mentioned anything is wrong?”

“No, but a woman knows these things. I remember when I had the two miscarriages and then when Kenny was born and the months prior to his birth. I feel different now, not all the way I did any of the other times. Something has changed inside me.” 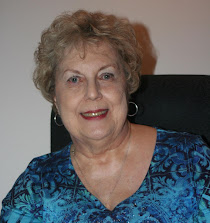 Caroline Clemmons, through a crazy twist of fate, was born in town instead of on a Texas ranch. To compensate for this illogical error, she writes about handsome cowboys, feisty ranch women, and scheming villains in a tiny office her family calls her pink cave. She and her Hero live in North Central Texas cowboy country where they ride herd on their two rescued indoor cats—Sebastian the tuxedo cat, and Jasmine the shy Balinese—and their Shih Tzu, Chloe, as well as providing nourishment outdoors for a collection of wild critters who stop by to dine.

The books she creates in her pink cave have made her a bestselling and award-winning author. She writes both sweet and sensual romances about the West, both historical and contemporary as well as time travel and mystery.

When she’s not writing, she loves spending time with her family, reading books written by her friends, eating out, browsing antique malls, researching genealogy, checking Facebook, and taking the occasional nap.