Welcome back to Notes From a Romantic's Heart. Today we're featuring the fourth and final book in the Ghosts of New England: Skullery Bay anthology.
About Book #4 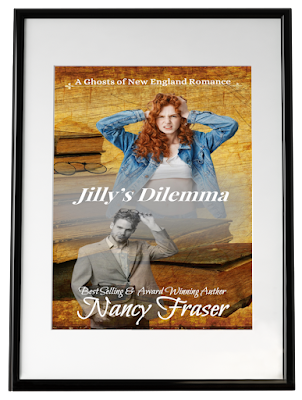 Jilly’s Dilemma (Present Day)
Best Selling & Award-Winning Author Nancy Fraser
She’s the new owner of Fairwinds, a flaky artist who talks to ghosts. Repeatedly.
He’s the staid, young professor there to document Fairwinds' history.
Their love will make you believe in the legend.

When Jillian Barclay inherits the family estate of Fairwinds from her father, it comes with the provision that she must live there for a minimum of three years before she can sell the property. Jilly grew up at Fairwinds, so she’s more than aware of the strange occurrences, the presence of the ghosts of Captain John Jacob Wilder and Lillian Wilder—the infamous 18th century pirate and his beloved wife. As a matter of fact, Jilly talks to them on a regular basis.

A renowned sculptor, Jilly reluctantly relocates her studio to Fairwinds and sets out to honor her father’s wishes. There’s a second provision in her father’s will that has her more concerned than having to put up with the home’s extremely active spirits.

Nicholas Martin, PhD is about to become Jilly’s other problem. An associate professor of history, Nicholas has been granted five days’ access to Fairwinds to study the home’s history as part of research project for Harvard University’s history museum.

Expecting a stodgy old professor, when Jilly meets the professor, she’s wishing he was there to model for her rather than study her home. Younger, and far sexier, than she’d pictured, she’s immediately drawn to the handsome professor.

Nicholas has spent the previous three weeks studying five other homes on the list of historical New England homes, all of which were inhabited by octogenarian, cat-loving spinsters. He has no reason to believe Fairwinds will be any different. The young woman with the wild red curls and penchant for talking to spirits is the last thing he expected, and the one thing his usually buttoned-up personality needs. Desperately.

Will opposites truly attract? Or is it just the unusual effects of the ghostly carnal encounters that drives them into one another’s arms? And when they can no longer resist their desires, will they be able to find a working compromise to his professional career and her legal commitments?
Enjoy an Exclusive Excerpt
Jillian sank back in the brocade-covered chair and drew her cup of tea to her lips, hopefully hiding her amusement behind the rising steam. Professor Nicholas—but not Nick—Martin’s bright blue gaze flared appreciatively when she’d offered to tell him everything there was to know about Fairwinds. 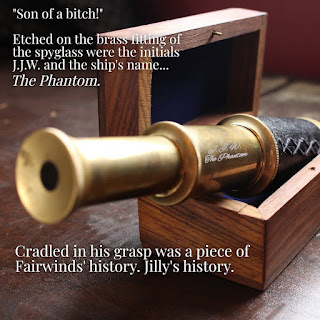 “Would you mind if I recorded our conversation?”

“I suppose it would be okay.”

She waited while he took a worn notebook from his jacket pocket and clicked the top of his gold-plated ink pen. Sliding the tips of his fingers across the screen of his cell, he pulled up the voice recorder and hit the start button before laying the device on the table between them.

“Day one, Thursday, one-thirty.” Nodding in her direction, he asked, “How about we start from the beginning?”

Drawing a deep breath, she told him, “That would be 1737, when Captain John Jacob Wilder won Fairwinds and the hand of his lady love, Lillian Grace Langdon, in a game of chance.”

“A game of chance?” he repeated, scribbling frantically in his notebook.

“Yes. There was no love lost between Captain Jake and Everett Langdon, a wealthy merchant and Lily’s father. As a matter of fact, Jake and his twin brother Aiden often set sail on Jake’s ship, The Phantom, with the express intention of raiding one of Mister Langdon’s many vessels.”

“Fascinating,” he mumbled, adding to his notes.

“Jake and Aiden perished on the ship during a violent storm. Aiden left behind a wife, Primrose Gimbly Wilder, and a young daughter named Pearl. No more than a few months after the shipwreck, Lily died of a broken heart.”

He made another note and then raised his head to meet her gaze. “In the bits and pieces of history I’ve read, former residents and employees have said Fairwinds is haunted by the ghosts of Captain Wilder and his wife. As the owner of Fairwinds, how do you deal with these fanciful tales?”

Go ahead, tell him. He won’t believe you anyway. Nobody ever does until they witness it for themselves.

“Very carefully, and with a smile,” she chose instead.
Meet the Author

The entire Ghosts of New England: Skullery Bay anthology is on sale for

99 cents at your Favorite Retailer.
~ ~ ~
Thank you so much for spending this week with the authors of Ghosts of New England: Skullery Bay. We've enjoyed having you. Please come back next week for more authors, books, and even a few giveaways!
Nancy
at August 20, 2021