Welcome back to Notes From a Romantic's Heart. Today we're featuring the third book in the Ghosts of New England: Skullery Bay anthology. 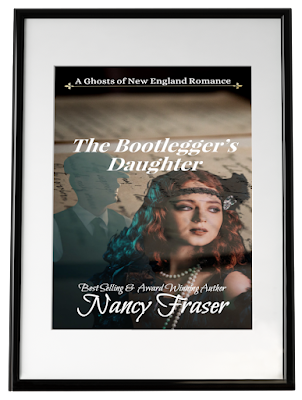 The Bootlegger’s Daughter (1924)
Best Selling & Award Winning Author, Nancy Fraser
She’s the daughter of one of the FBI’s most wanted criminals.
He’s her bodyguard, and not at all what he seems.
Their love will return dignity to the legend.


Mallory McGuire is the daughter of one of New England’s most notorious criminals. She’s also the legal owner of Fairwinds, the estate left to her by her late mother after Helene McGuire’s fall from the cliffs overlooking Skullery Bay.

The many underground tunnels and hidden passages in the stately Fairwinds hide even more secrets than it does illegal activity. Then there’s also the unusual noises, the strange occurrences within the house itself, that set everyone on edge.

Harry Carter is a disgraced ex-Pinkerton detective, on the lam from his former employer for embezzlement. Now working for Malcolm McGuire, he’s charged with being Mallory’s bodyguard to protect her from her father’s many enemies. Harry’s as hard-edged as they come, and not the least bit pleased with his latest assignment from the boss.

As straight-forward as his unwanted protection assignment should be, things get complicated when he learns the truth about Mallory. She’s definitely not what he thought—who he thought—she was. Now that he knows, protecting her has taken on a whole new meaning. And along with his increased protection has come an awareness, a desire that he does his best to deny.

When his desire becomes their desire, will things heat up to the point of no return? And when she discovers he’s hiding secrets even bigger than her own, will she be able to forgive him and accept the possibility of a happily-ever-after?

Enjoy an Exclusive Excerpt
Mallory McGuire sat in the huge leather chair in Mr. Miller’s austere office, dwarfed by not only the oversized furniture but by the gaggle of men surrounding her—the solicitor, her father, his two largest bodyguards, and a younger man she believed to be Mr. Miller’s son-in-law and law partner, Joshua Blake. 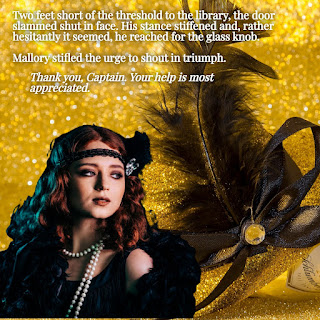 She didn’t want to be here, yet the attorney for her late mother’s estate had insisted.

Mallory’s heart ached from missing her beloved mother, dead barely more than a month in a freakish accident, a fall from the icy cliffs at Fairwinds.

Gossip had swirled around the accident and she’d had a difficult time containing her grief, much less handling the horrible thought that her mother had become the most recent victim of the Fairwinds’ curse.

As much as her mother loved her ancestral home, Mallory knew the stories couldn’t be true. The supposed ghosts of past ancestors wouldn’t have taken someone so gentle and kind as her mama to an untimely death.

Miller took his seat behind the desk and motioned for the others to sit as well. “Let’s get this meeting started.” Nodding in her direction, he added, “Miss Mallory, I know you did not want to attend this reading, but it was one of your mother’s last wishes that you be here. As her lawyer for nearly thirty years, I was obligated to honor her request.”

Mallory shifted in her seat, pressed the flat of her hand over her plain black jumper and, with trembling fingers, pushed errant strands of her curly red hair behind her ear. “I’m fine, sir, and most grateful for your adherence to my mother’s request.”

The solicitor gave a nod of his head and began, “We are here today to unseal and review the Last Will and Testament of Helene Elizabeth Bradford McGuire. In the matter of her bank accounts, as outlined in Appendix A...”

Mr. Miller passed a copy of the appendix to both her father and her. She gave it a cursory glance, as he continued to speak. His words ran together, something about money in foreign accounts, investments made by family as far back as the early 1800s. With each new revelation, her father’s demeanor changed—flowing from something akin to disbelief to outright glee. And then deflated just as quickly once the solicitor reviewed the myriad of stipulations surrounding the disposition of the accounts.

Had he truly not known the extent of her mother’s wealth? And, how would her father deal with receiving only a small portion of her money?

“As to the matter of Fairwinds, the family estate...”

Mallory raised her head, her attention focused solely on the solicitor’s next words.

“...the home, and all of its contents, as listed in Appendix B, is hereby bequeathed to Miss Mallory Lillian McGuire, to be held in trust for her until she reaches either her twenty-fifth birthday or enters into a marriage of her own choice, whichever shall come first.”

The entire Ghosts of New England: Skullery Bay anthology is on sale for

99 cents at your Favorite Retailer.
~ ~ ~
Come back tomorrow and enjoy a sneak peek at the third book in the anthology, Jilly's Dilemma by Author Nancy Fraser.
Nancy
at August 19, 2021