Welcome to Notes From a Romantic’s Heart. Today, we’ll be featuring author Carol Nickles’ new release, Thumb Fire Desire, a historical romance set in the late 1800s. You can find all of the stops on Carol’s tour at Goddess Fish Promotions. Don’t forget to enter the Rafflecopter drawing. The entry form is at the bottom of this post.
Genre: Historical Romance
From the Author
The village of Parisville, smack dab in the middle of the “thumbnail” of Michigan’s thumb-shaped peninsula was established in 1856 by Polish immigrants and is the real-life setting of my novel, Thumb Fire Desire. Parisville has not changed much. Acres and acres of land are devoted to farming. St. Mary’s Catholic Church, thrice destroyed by fire, first in 1871, then in 1881 during the Great Thumb Fire (featured in my book), and then again in 1974 still stands. The majority of surnames represent the descendants of the early Polish settlers – Guza, Pawlowski, Lemanski, Susalla and more.

Since I strive to keep real-life sadness at bay, when I choose a book to entertain me, I look for one with a predictable happy ending. The romance genre guarantees that finale.

But I also love stories of adventure in the name of science and braving the wild. One of my favorite reads as a girl was Call of the North by Jack London. And the book on my nightstand that I will hate returning to the library is Wolf Island a memoir by L.David Mech. Wolf Island is set in Isle Royale, a national park island in Lake Superior, the largest of the Great Lakes. L. David Mech regales us with tales of the first years of the world-renowned prey-predator relationship study conducted on this remote island. The story has long intrigued me. I am spring boarding this interest into another historical romance, Past Preserve Us, not yet under contract.

Unlike some writers who prefer white or no noise, I seek noise. Music fills that need. I like instrumental, with no lyrics so I am transformed not by a message, but by a rhythm. Smooth jazz, lilting island music are my go-tos. My favorite is a well-worn CD featuring music indigenous to the Pacific islands of Fiji. 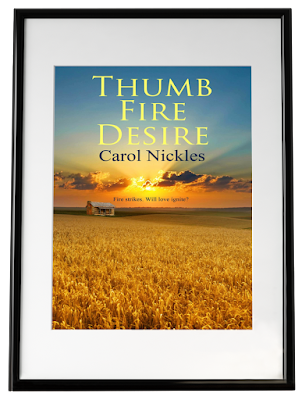 In the Spring of 1881, indigent seamstress Ginny Dahlke arrives in one of the earliest Polish American settlements-Parisville, Michigan. Deemed charmless and awkward by her mean-spirited sister-in-law, Ginny disparages her chance of securing love. But sought-after widowed farmer Peter Nickles is enamored by Ginny's perseverance, her pioneer spirit and, her inclusive acceptance of the indigenous peoples of Michigan. The seductiveness of a buxom heiress, a twisted story of an old-country betrothal, and the largest natural disaster in Michigan's history-The Great Thumb Fire of September 5, 1881, challenge their fledgling attraction and ultimate committal.

Find it in eBook and Print on Amazon

Peter sat atop the hay bale. Joseph’s shadow grew deeper and then faded away. For the first time, he and Ginny were alone—if he didn’t count a barn full of bawling sheep, milk cows dunking their heads in feed pails, Buster and Blue lazily flicking their tails, and slinky cats prowling the hay. His breathing came ragged. His chest puffed. He bent at the knees, shoved his hands under the bulk of shorn fleece, slowly aligned his spine, turned toward Ginny, and lost sensation in his arms. He dropped the pile, scattering barn dust and errant wool strands. 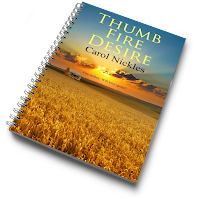 She stood idle. The sunshine pouring through the slats on the barn’s east side outlined her silhouette. The soft hollow in her neck swelled and emptied. A clothesline, bare for the warped wooden pins straddling it, swayed between its oak tree moorings behind her. She lifted the tray, set Joseph’s glass on it, and held her hand for his drink.

“I’ll wash your shirt. Sorry I spoiled it.” She leveled her gaze to his.

He turned the glass in his hand. A single mint leaf stuck to the bottom. He fished it out with a finger and rolled the bumpy foliage in his palm, releasing its scent. He rubbed the leaf on his wrist and opened his mouth. He bit into the sprig, savored the fresh prickly taste, and swished it around his gums and teeth. He swallowed.

Carol Nickles is the sixth generation of a German textile aficionado family. In 1881, her great-great-great-grandfather founded Yale Woolen Mill—the longest-lasting of Michigan’s once twenty-nine woolen mills. Carol earned a Master’s degree in Historic Clothing & Textiles at Michigan State University. Her thesis is a narrative of the Yale Woolen Mill. She held faculty positions at both Utah and Michigan State universities. She lives in West Michigan and enjoys spinning a tale, weaving a story, and threading a luring hook.
Carol's Website ~ Facebook ~ Twitter ~ TikTok

Carol Nickles will be awarding a $50 Amazon/BN GC to a randomly drawn winner via Rafflecopter during the tour.

a Rafflecopter giveaway
~ ~ ~
Thank you so much for stopping by. Please come back again soon! And, thanks to Carol Nickles for sharing her book with us today.
Nancy
at July 22, 2022