Welcome back to Notes From a Romantic's Heart. Today we're featuring the second book in the Ghosts of New England: Skullery Bay anthology. 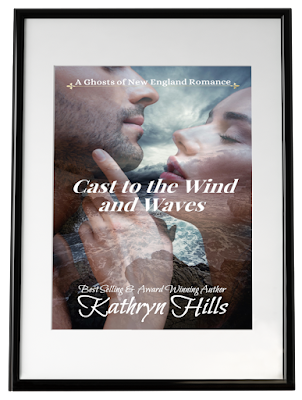 Cast to the Wind and Waves (1837)
Best Selling and Award-Winning Author Kathryn Hills
She’s the heiress determined to restore Fairwinds to its former glory.
He’s the solicitor working as a caretaker because of the deadly curse.
Their love will rebuild the legend.

A storm is coming to Fairwinds after lifetimes of emptiness. Can love survive the dark secrets revealed there?

A house of mystery and shadows awaits Lucy Ellison on the windswept coast of New England. Neglected and all but forgotten, Fairwinds is the centuries-old estate of her ancestors. Locals know the legend and stay away. Whispered stories of vengeful ghosts and pirate curses. Lucy never imagined she’d experience them firsthand, until her brother banishes her there following the death of their father. But the resident spirits are the least of her worries. Her brother’s schemes include marrying her off to a stranger. The question is why?

Nathaniel Bradford arrives at Fairwinds to discover the latest victim on the rocks below the sea cliffs. Unless Nate agrees to step into the dead man’s shoes, his mother will be the sole caretaker of the vast estate. His law firm in Boston can spare him for a few weeks, but how can he find a replacement for a man who supposedly left by way of a deadly curse? The unexpected arrival of the beautiful heiress, Lucy Ellison, complicates everything. She’s from the dubious family that continues to upend Nate’s life. Yet their mutual attraction is as swift and powerful as the waves surrounding them.

Deceptions, and dangers, adventure, and intrigue cast two lovers into the legend of Fairwinds. Can their bond weather the storm? Or will unknown forces tear them apart?

Nathaniel walked silently through the dark halls of Fairwinds, heading for the library. The place his mother said Lucy waited for him.

Memories of her beauty the night before still unsettled him. Long hair undone and falling about her shoulders like a shiny brown curtain. Her naked form, barely visible beneath her nightgown. She’d been a silhouette of curves against the backdrop of the fire’s glow. The globes of her breasts, swaying as she adamantly plead her case that Fairwinds was haunted. 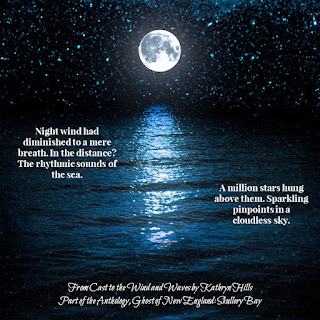 Aye, the house is haunted. But dare I speak the truth I’ve come to know?

Fear that Lucy Ellison would leave Fairwinds like all the rest, once she learned the extent of the hauntings, left a pit in Nate’s stomach. Whether he liked it or not, he was powerfully attracted to the new lady of the house.

Approaching the library door, he eased it open to peer inside. Lucy sat before the large, ornate fireplace in one of the old wing-back chairs. She wore a simple grey dress, her hair pinned up and tamed again. Reserved and distant. Somber in her loss. About her shoulders was his mother’s favorite, thick shawl to ward off the November chill. Pip slumbered in her lap alongside a discarded book.

“Penny for your thoughts,” he murmured upon entering.

Lucy startled, yet her gaze warmed when connecting with his.

“I’m sorry I frightened you.”

“You didn’t.” She gave him a weary smile. “I was but lost in my thoughts.”

“I see Pip is off duty tonight,” he teased.

“Yes, he hasn’t found a single thing to interest him in the house, proving my theory. Fairwinds has a ghost problem, not a rodent problem.

Nate sat beside her in a twin chair, and he held his cold hands out to the fire. “My mum said you’ve been in here for hours. And that you didn’t want dinner.”

“I’m not hungry.” She glanced around them. “I am, though, quite fond of this part of the house. I imagine it was most impressive when these carved, mahogany bookshelves were filled with volumes.”

“Like the library at my university. They had a sitting room with a fireplace, tucked away, so it was often empty. It was my favorite place to work.”

Lucy gave him an admiring smile, as she stroked the sleepy cat. Nate watched her graceful fingers, transfixed as they glided through Pip’s striped fur.

“Thank you for seeing Mistress Grimes safely to town.”

“She’s onboard a coach bound for Boston already,” he explained. “Didn’t waste a second looking back.”

“Did she say where she would go after Mystic Point? Would she stay in Boston, for example?” Lucy asked, sounding genuinely concerned for the woman, who was often cruel to her.

“She’s not one for sharing, especially with the hired help. Didn’t utter a word the entire way there. Except to threaten my life should I let anything happen to you.” 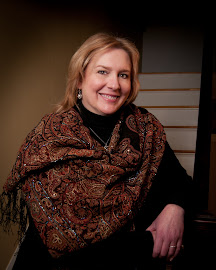 KATHRYN HILLS—The rich history and many mysteries of New England are the perfect backdrop for many of Kathryn’s books. Winding roads lined by old stone walls, forgotten cemeteries, grand homes with shadowy pasts...all sparks for her imagination. Whether it’s a quaint seaside town or the vibrant city of Boston, it’s easy for this “hauntingly romantic” author to envision the past mingling with the present. No surprise, some of Kathryn’s favorite stories involve time travel. And ghosts! Sprinkle in some magic, and you’re off on a great adventure.

When not writing, this best-selling author is researching, gardening, or cooking up something special in her chaotic kitchen. She shares her colonial home in the north woods with those she loves most – her wonderful husband and daughter, and three crazy dogs.

The entire Ghosts of New England: Skullery Bay anthology is on sale for
99 cents at your Favorite Retailer.
~ ~ ~
Come back tomorrow and enjoy a sneak peek at the third book in the anthology, The Bootlegger's Daughter by Author Nancy Fraser.
Nancy
at August 18, 2021